Today closes out what will go into the record books as the hottest June/July on record in Memphis, ironically with one of the coolest days in the two-month record! Until this past Friday, not a single day since June 11 had failed to reach 90 degrees, and most of them were in the mid 90s or higher. Sixteen days have seen the high reach 100 degrees! Not only will the average temperature (average of all highs and lows) be the hottest on record, so will the average high temperatures, eclipsing 95 degrees for only the third time on record (including 1952 and 1954). 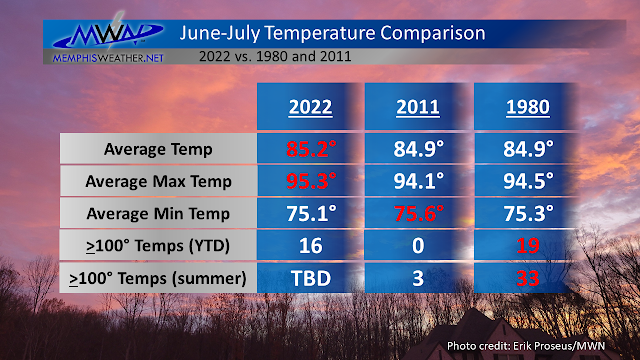 That heat has been exacerbated by, and with some likely contribution from, the lack of precipitation. Until a wetter pattern started on Friday, total precipitation for the past two months has been more than five inches below the norm of around nine inches. This has resulted in flash drought conditions as shown below. The drought allows the temperatures to be even hotter because there is less moisture fed back into the low atmosphere from the ground, allowing it to heat more than usual.
But this weekend has provided a reprieve, as a front finally stalled over the area and moisture from the southwest streamed in, allowing multiple rounds of precipitation to fall over the entire region. While the ground eagerly soaks up the welcome rainfall, the clouds and precip are holding high temperatures below normal on consecutive days for the first time in a month. Muggy conditions, featuring dewpoints in the mid 70s, are keeping morning lows warm, but anything below 80 degrees is likely ruled a win right now!

Looking ahead, the upper level trough that resulted in this welcome pattern shifts to the east to start the week. We'll likely see elevated rain chances into Monday afternoon before high pressure at the surface and upper levels builds back in for the next several days. This pattern will mean a return of more typical summertime conditions. In case you've forgotten what is "expected" in summer, it isn't 100 degrees and parched earth! We're looking at highs in the low to mid 90s, enough humidity to kick heat indices just above 100, lows in the mid 70s, and small thunderstorm chances during the afternoon hours that will probably miss more of you than they will rain on. But we can't rule them out!
So while August will be hot, it should start off not-as-hot as we had for much of the month of July, which will be the second hottest July on record behind only the benchmark of 1980.
Erik Proseus
MWN Meteorologist