It's no secret that heat has been a major story locally, and also for much of the country, this summer. If you've seen the daily climate summaries we post on social media each evening, you may be seeing a lot of record highs from the year 1980. Those who have spent all or most of their lifetime in the area will be glad to tell you about ridiculously hot that summer was.
With 13 days that have reached the century mark so far this summer, and more likely to come, some comparisons are being drawn to the benchmark for Memphis summers. I decided to do a quick comparison of the two summers, in particular the months of July. Here's what I found when running the numbers for the first half of July 2022 versus the month of July 1980: 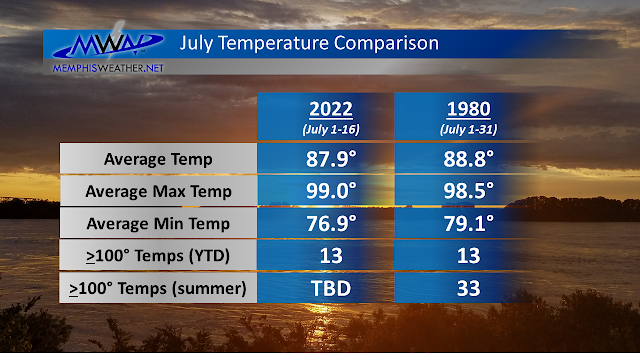 As you can see, if the pace we have set in the first half of the month continues (and none of us want it to of course), the average temperature for the month will fall within a degree of 1980. The average high temperature for the month is actually higher for the first half of July 2022 than it was for July 1980, while the overnight lows this month have been a couple of degrees cooler than they were in 1980. Through the 16th though, both months had the same number of 100 degree days so far in their respective summers. However, 1980 went on to reach the century mark 20 more times! I sincerely hope that is not what we have in store this year!
This heat is partially due to the lack of precipitation... and that lack of precipitation, particularly over the past month, has resulted in a rapid-onset drought. Comparing the Mid-South drought maps for mid-June versus just four weeks later in mid-July tells the tale: 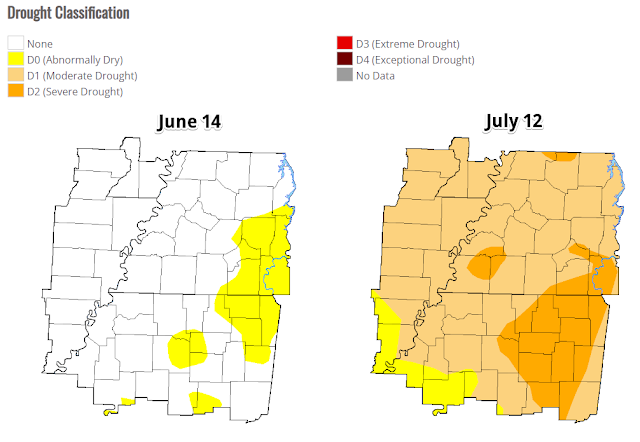 Rain chances with a "not so hot" front

High pressure ridging that has dominated for much of the first half of July is taking a brief rest in our area the next couple of days as it repositions to the west. That is allowing a front to move into the area, bringing decent precipitation chances over the next 24 hours. The highest probability will be tonight as what appears to be a semi-organized system moves in from the northwest ahead of the cold front. Showers and thunderstorms will be likely, with heavy rain for some and perhaps a few strong wind gusts roughly north of I-40.

Showers and thunderstorms are likely to affect the Memphis metro later this evening into the overnight. (Yay!) While severe storms with gusty wind are possible, the best chance will be north of I-40 (level 1 risk). Further to our north, the threat level is slightly higher. pic.twitter.com/yXwgL7eHg6

With the front lingering across north MS on Monday, rain chances could linger into the morning, then we'll have another chance of a few thunderstorms in the afternoon and evening too. Clouds will keep high temperatures closer to average as local thermometers take a break from the 100 degree mark. While today's high will be mid to maybe upper 90s, Monday should be in the lower half of the 90s.

As we head towards mid-week though, upper level high pressure will start building back into the Mid-South from the west. Temperatures soaring well above 100 in the southern Plains are a harbinger of the heat to come as the ridge noses over the area, squashing rain chances. Look for daily high temps at or just above the century mark Wednesday into next weekend. And since the early week front never really moves all the way through the area, drier air will remain to our north, so humidity will make it feel even hotter than the temperature would indicate. Look for Heat Advisories once again while heat indices climb above 105.
There are hints of a weak front late Wednesday, but at most it will bring an isolated shower then maybe ever-so-slightly drier air to end the week. Unfortunately, we appear destined for more 100 degree days this month, adding to the total for 2022. Continue to exercise caution in the hot weather and always look before you lock!
Erik Proseus
MWN Meteorologist

----
Follow MWN on Facebook and Twitter for routine updates and the latest info!
Complete MWN Forecast: MemphisWeather.net on the mobile web or via the MWN mobile app
Download our iPhone or Android apps, featuring StormWatch+ severe weather alerts!
Meteorologist Erik Proseus at 10:10 AM
Share