It's back!! After a couple years hiatus due to the COVID-19 pandemic, Beale Street Music Fest is back at full volume, albeit at a new location (temporarily) while Tom Lee Park receives a major renovation. Liberty Park at the Fairgrounds is the new location, with stages and vendors setup on Tiger Lane and the area west of the Liberty Bowl for the three-day festival.
Because it occurs during the rainy/stormy season, Memphis in May, and BSMF in particular, tend to also be referred to colloquially as "Memphis in Mud," although a couple of factors may make this year's rendition unable to live up to that name. First is the abundance of concrete, which, though harder on the feet, may keep festival-goers from having to trash the foot gear at the end of the weekend! Secondly, with one important exception, most of the weekend looks to be warm and dry! Let's break down the forecast, with particular focus on that "exception" mentioned above.

You really can't ask for much better weather for opening day. Gates open at 5pm to mostly sunny skies with a warm breeze from the south and temperatures in the lower 80s. As the evening goes along, some clouds will float by, but it remains dry as temperatures slip through the 70s with a fresh south breeze continuing. By the time headliners take the stage, temperatures will be in the lower 70s. Overall, a great way to start the weekend!

Saturday looks pretty good for the majority of the day. Those warm southerly breezes will have picked up and occasionally gust to about 30 mph as temperatures again reach the lower 80s by the time music starts at 2pm. There is a small chance of a couple passing showers late afternoon into the early evening, but nothing I am overly concerned about. (After all, it is a "rain-or-shine" event.) A bit more cloud cover foreshadows that slight increase in rain potential late in the day, but the majority of the musical acts are likely to have no issue other than some sweat from a corresponding increase in humidity!
Late in the evening to early overnight, a cold front will move through. This brings our "exception" referenced earlier, and a pretty good chance of rain and a few thunderstorms along the front. Timing could still waver a bit, and later would be better in this case as we hope it holds off until after the music ends, but as of Friday morning, the potential for storms increases pretty quickly after about 10pm, and drops off after 1am. While lightning and heavy downpours would be likely with any storms, the risk for severe weather is low. A few strong wind gusts or small hail are the primary threats should storms become strong.
Note that while BSMF is "rain-or-shine," lightning and more significant storms are not "rain" by this definition. Some of you have probably been to Memphis in May events in which storms resulted in an evacuation of the park for a time. We'll cross our fingers that the forecasted storms either arrive just after music ends, or dodge the Fairgrounds entirely. (Full disclosure: MWN provides on-site meteorologists for all Memphis in May events, keeping MIM officials constantly informed in the event of inclement weather. MWN does not issue evacuation orders.)

With the cold front to our south in north Mississippi by Sunday morning, the sunshine returns, wind is lighter, and humidity levels will also be down just a bit, making for a perfect day to be outdoors! Music starts at 2pm with temperatures again just above 80 degrees, but I expect 80 on Sunday will feel better than 80 on Saturday. As the sun sets in the evening, temperatures will be in the 70s and falling towards the upper 60s by the time the gates close. 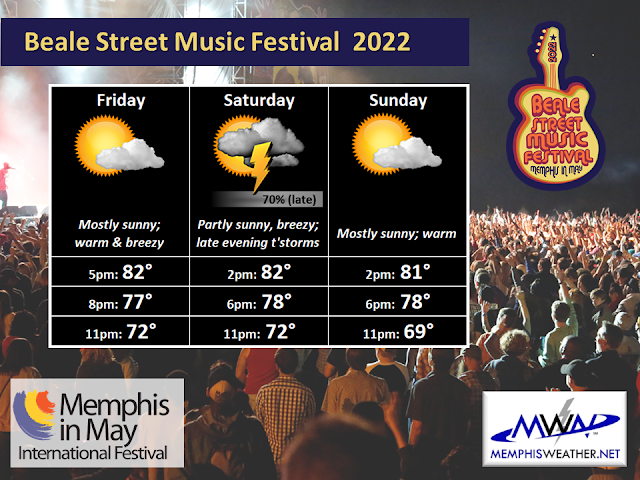 Whatever you have planned this weekend, have fun and stay safe! We'll be keeping you updated on our social media feeds all weekend along.
Erik Proseus
MWN Meteorologist

----
Follow MWN on Facebook and Twitter for routine updates and the latest info!
Complete MWN Forecast: MemphisWeather.net on the mobile web or via the MWN mobile app
Download our iPhone or Android apps, featuring StormWatch+ severe weather alerts!
Meteorologist Erik Proseus at 10:15 AM
Share