Briefly a hurricane, Barry made landfall on the central Louisiana Gulf Coast this morning and is moving slowly north through Louisiana. It will remain over Louisiana through much of Sunday before heading north through central Arkansas west of Little Rock Monday as it weakens to a tropical depression. Unfortunately, that means the weather in the Memphis area will be depressing for a few days as well.

Pictures are worth at least 1000 words each when you're talking about weather, so I'll use a lot of them in this update. First, the latest track from the National Hurricane Center: 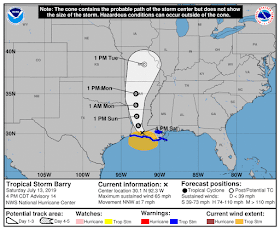 And as an overview, below is how the European model handles Barry's movement through Wednesday evening. It has done a very good job of predicting the path of the storm to this point.

The main story for our area will not be wind (though for the Mid-South, it will be more than we are typically used to), but the rain. We'll start there. The outer portion of Barry's main rain shield will move into the metro Sunday morning, maybe before daybreak. However, despite likely being steady, we won't get an unusual amount during the day Sunday. Here's the NWS rainfall total through Sunday at 7pm (it's about half an inch):


Sunday night is when the rain really starts to pick up, especially after midnight. We could see a couple inches of rain in some areas. A few thunderstorms are possible as well which could enhance rain totals in spots.

Monday is a continuation on the rainy pattern, though with the center moving by to our west, we could see more banding of rain set up with localized heavy amounts and others getting less. The NWS puts precipitation totals Sunday night through Monday at 7pm above 2" in the metro, heavier to the west, closer to the center of the storm.


Rain remains likely Monday night as the remnant low moves north into southern Missouri with showers and thunderstorms continuing off and on Tuesday. As the rain is not quite as continuous by Tuesday, a bit more heating could take place and result in more thunderstorms than Sunday or Monday. Precipitation from Monday night through 7pm Tuesday, another 2-3":


By Wednesday, the system starts moving east through the Ohio Valley and we get back to a more scattered thunderstorm pattern as highs climb back to near 90. All of the previous rain will mean a muggy environment. After a few days in the 70s and 80s, a heat index near the century mark Wednesday will be an unwelcome reminder that it's still summer. By Wednesday evening, total rainfall amounts from Barry will likely be in the 4-7 inch range. That's a month's worth (or more) in 4 days. Some areas could potentially see 8"+.


For this reason, Flash Flood Watches go into effect Sunday and continue through early Wednesday. 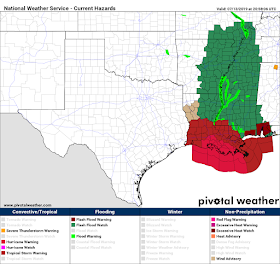 The long duration event means that local rivers will rise and poor drainage areas could be a real issue. We remind you to "Turn Around, Don't Drown!" Avoid areas with water covering the road. Stay away from drainage ditches and high water in creeks, ponds, etc. (and keep your kids away from them too!). If you're in an area prone to flooding, you might consider leaving for a few days.

As expected from a remnant tropical system passing nearby, we'll get enough wind for some bad hair days, but probably not a lot of widespread damage. Southeast to southerly wind will be the norm as the low passes by to the west. We'll see gusts Sunday afternoon and evening into the mid 20s to near 30 mph.

Sunday night and Monday will likely be the windiest with gusts routinely into the 30s and some areas seeing 40 mph or higher. Coupled with the soaking rain and soft ground, 40 mph could be enough to topple some trees and maybe affect power to some areas as well. Plan to keep those devices charged and secure anything outdoors that you can Sunday before the wind picks up. By Tuesday, it'll be breezy but nothing we don't see semi-routinely in spring or fall.

Land-falling tropical systems are also known to spawn a few weak and brief tornadoes in their eastern semicircle well inland. It doesn't take big supercell thunderstorms to initiate these. Heavier showers in bands rotating around the center can encounter just enough instability, and already are in a high shear environment, to spin up weak tornadoes with very little notice. The most likely time that these spin-ups MAY occur is Sunday afternoon and Monday. For this reason, the Storm Prediction Center has placed areas mainly near and west of Memphis in a Marginal Risk (level 1/5) for an isolated tornado Sunday and Monday. 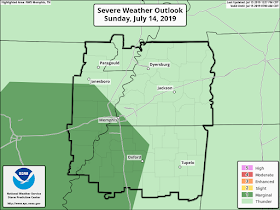 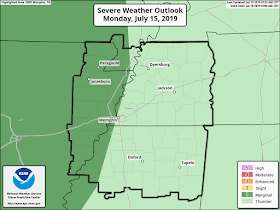 That gives you a pretty good overview of the hazards we could expect over the next several days. Stay with MemphisWeather.net, particularly on our social media channels, and other local sources as we bring you the latest information while Barry moves through the region.

----
Follow MWN on Facebook and Twitter for routine updates and the latest info!
Complete MWN Forecast: MemphisWeather.net on the mobile web or via the MWN mobile app
Download our iPhone or Android apps, featuring StormWatch+ severe weather alerts!